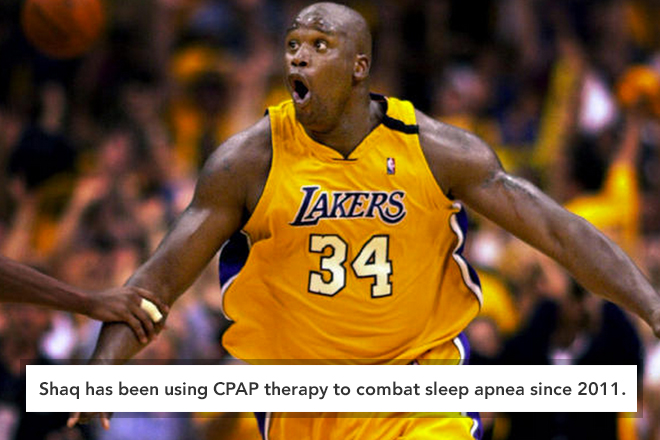 At seven feet tall and weighing over three hundred pounds, Shaquille O’Neal used his height and size to score some of the most points and rebounds in basketball history. But what is little known about the basketball superstar is that he suffers from obstructive sleep apnea. His girlfriend, Nikki “Hoopz” Alexander, was a witness to Shaq’s loud and incessant snoring and restless sleep – she also noticed that his snoring and other symptoms became worse when he slept on his back. So, Shaq decided to get help.

Being that Shaq’s last leg of his career was spent playing for the Boston Celtics, he decided to visit Harvard Medical School’s Division of Sleep Medicine, which is one of the best in the world. Shaq received an overnight polysomnography, or sleep test, to measure brain waves, eye movements, chin-muscle activity, airflow from the nose and mouth, chest movements, blood-oxygen levels, heart rate and leg movements. The physicians spent one lucky night with the basketball player – watching his every somnambulant move to determine the severity of his condition.

The results: moderate obstructive sleep apnea. The next step: discuss therapy options. The doctors discussed with Shaq all of his options for treatment. One was an oral mouthpiece, which is often ineffective and uncomfortable to wear. Another option was surgery, which is invasive, painful and not often permanent. The doctors at Harvard then recommended CPAP, which they said was “the treatment of choice” when it comes to alleviating the symptoms of obstructive sleep apnea.  The sleep specialists also mentioned that if used nightly, CPAP works nearly 100% of the time – “Obstructive sleep apnea is a chronic condition which is imminently treatable.”

After Shaq was formerly diagnosed and therapy options were considered, it was time to begin CPAP treatment. First, though, Shaq had to find a mask that properly fit – he is nearly two and half feet taller than the average man. Luckily, there are plenty of different masks to choose from. The doctors made sure to point out that “getting a mask to fit is a cardinal part of effective [CPAP] treatment.” This means that if you suffer from obstructive sleep apnea – whether it is moderate or severe – finding a comfortable mask is integral to compliance and getting the most out of CPAP treatment.

In the end, Shaq settled on a nasal CPAP mask. And after undergoing treatment, Shaq started experiencing immediate results: “Since I met with Dr. C (Charles A. Czeisler, PhD, MD), I’ve been getting at least seven, eight, nine hours of sleep a day. I feel good, the weight is good, got a lot of energy, the relationship is good at the house. Everything is working.” In the end, if Shaq can attack sleep apnea – so can you. If you suspect that you may have sleep apnea, it is time to get tested and start undergoing CPAP treatment right away.