The strangest thing about hypertension: most people have no idea they have it. While there are some symptoms, like constant headaches, fatigue and difficulty breathing, oftentimes people don’t find out that they have hypertension, or high blood pressure, until they are waiting to get a prescription filled at the market and sit down to use one of those blood pressure machines. Yet, there is a strong chance you have hypertension if you also have obstructive sleep apnea. In fact, 20% to 30% of sleep apnea sufferers have hypertension. Two recent studies, however, have found that people who treated their sleep apnea with continuous positive airway pressure, or CPAP, vastly reduced their chances of getting hypertension in the first place. 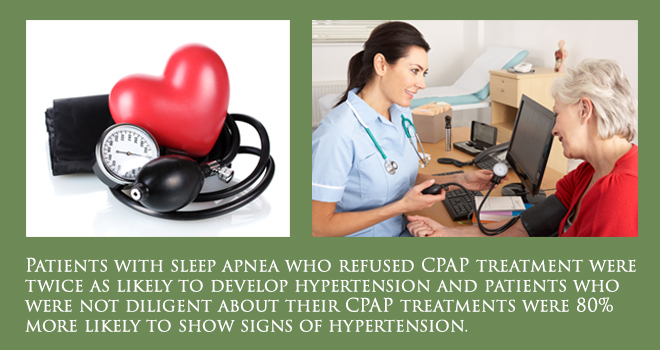 Hypertension, which causes the blood pressure in the arteries to course through at elevated levels and makes the heart work harder than it has to, can be a risk factor for a number of other nasty cardiovascular disorders, like stroke, heart attacks and aortic aneurysms. Where does sleep apnea come in? They think that because of the sudden and repeated drops in oxygen caused by the sleep disorder, that eventually your blood pressure starts to rise to dangerous levels, thus causing hypertension.  But the battle to determine positive causation between sleep apnea and hypertension has been a hard fought one, mainly because people with sleep apnea and hypertension also have other problems that might cause high blood pressure, like obesity.

However, two studies have gone beyond causation and straight to the nitty-gritty of the matter: deciding whether CPAP treatment can prevent hypertension in patients with sleep apnea – regardless of other factors that might be causing their high blood pressure. The answer: it does. In the first study, which was published in the spring 2012 issue of the Journal of American Medical Association, 730 patients with sleep apnea were observed in hospitals in and around Spain. The patients were then split into a control group that received no treatment and a treatment group that received CPAP therapy. The results: patients wearing a CPAP mask for 4 hours or more each night were 28% less likely to show signs of hypertension.

The second study, which was much more intensive and showed a stronger link between CPAP treatment and the prevention of hypertension, also got down to the nitty-gritty, but in a much nittier and grittier way. The study, which was conducted at the Respiratory Unit at Miguel Servet University Hospital in Zaragoza Spain, took a look at a whopping 1,900 patients and gave them sleep tests over the course of six years. Patients diagnosed with sleep apnea were then observed annually for another eleven years – all the way up until 2011. The results showed that patients who refused CPAP treatment were twice as likely to develop hypertension and patients who were not diligent about their CPAP treatments were 80% more likely to show signs of hypertension.

A coincidence? Many doctors and researchers don’t think so. In the domino effect of health issues that sleep apnea can cause, CPAP treatments are yet again the saving grace. What can we learn from these two studies? In so many words, if you have sleep apnea and don’t want to develop hypertension, stick to your CPAP treatments. If you have been diagnosed with sleep apnea and are considering forgoing CPAP treatments – you certainly shouldn’t. Why? – Because your life might depend on it.