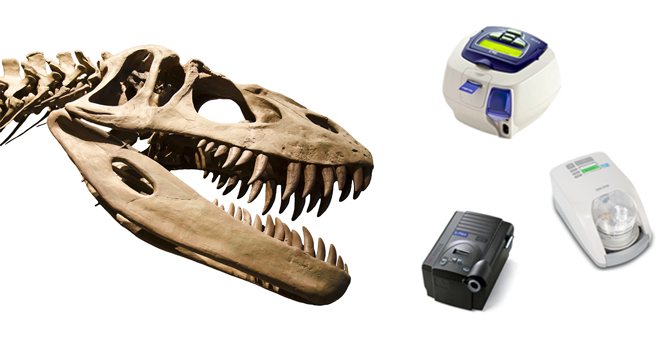 There is another major reason the dinosaurs died out, besides the fact that a massive asteroid hit the earth. They were too big, they were too clunky and they didn’t have a few key features that allowed them to adapt to different environments. Well, the same thing could be said about your CPAP. In fact, there is a good chance that you have an extinct species of CPAP that is turning into a fossil on your nightstand right now. This is why it may be time to upgrade your CPAP.

Like the Velociraptor, which was a small and agile creature that could move lithely where other larger dinosaurs couldn’t, the RemStar M Series was great for sleep apnea sufferers on the go. Indeed, it was convenient to carry around and it had a nice little compartment that hid a water chamber for the humidifier, but that’s about it. If you look at the RemStar compared to today’s CPAPs, the LCD display looks like it belongs on an old fax machine. Plus, it’s huge compared to new models. The shape and overall design definitely look best suited for a prehistoric CPAP era.

The S8 series from ResMed is definitely the trilobite of the extinct CPAP world. Small and round – with the ability to adapt to almost any environment – the S8 was a great option for someone that wanted a compact CPAP experience. Of course, this was a time before more advanced compact CPAPs, like the Z1 Auto CPAP System. The Z1 is not only compact – it also has the Z-Breathe algorithm, which learns when you are exhaling and adjusts the pressure accordingly.

Taking it back to the early Permian CPAP era, the S7 is another extinct continuous positive airway pressure system that you definitely need to retire. In its heyday, this prehistoric CPAP species had some fun features, like automatic start and stop – and even a nice little carrying handle – but compared to today’s CPAPs, those features pale in comparison. This is especially the case with some the higher tech CPAPs that have embedded algorithmic technology and automatized features that offer a more comfortable and convenient treatment experience.

Like the Triceratops, the RemStar Legacy Series is bulky and just doesn’t look like it fits with today’s CPAP times. It had some interesting features and a number of pressure settings, but the software in this machine is now unwieldy, slow and definitely not as streamlined as some of today’s “smart” CPAP machines.  Today’s smart-PAPS respond to a broad range of criteria – like loudness of snoring and sleeping positions – to automatically adjust to the ideal pressure setting. Basically, with today’s CPAP systems, you don’t need to battle with an ancient interface that is unintuitive and difficult to use.

This SleepStyle 234 is definitely the Parasaurolophus of the prehistoric CPAP world. This CPAP just looks strange and old fashioned. It had some nice features for its day, like a built-in humidification system and Ambient Tracking, which measured the room temperature and adjusted the heat plate in the hose to prevent rainout. But if you look at some of todays CPAP hoses, like the ThermoSmart heated hose and the ClimateLine tubing – both of which use advanced algorithms – the SleepStyle just looks like a prehistoric species doing its best with the technology of a different CPAP era.

The Ankylosaurus was bulky, boxy and had a really tiny head compared to the rest of its body – it kind of reminds you of the GoodKnight – an ancient CPAP system from Clovidien. Even this CPAP’s name sounds old fashion. Plus, if you look at the promo photos, one of the units is sitting in someone’s briefcase (who carries a briefcase anymore?) next to a flip phone (yep, those phones you had to flip open to use) and a calculator (something that you don’t need with today’s smartphones). Indeed, the GoodKnight is a relic of another CPAP era – an era where smart technology was but a mere dream; not a reality like it is today.

At the end of the day, there are a lot of CPAP dinosaurs still roaming the earth today. Well, not really roaming – they are probably chugging along – on their last legs – ready to give up any day now. Today, you have the new super CPAP species, like the AirSense 10 AutoSet, which not only looks gorgeous – it also performs like a champ too. It has SmartStart technology, which allows you to start therapy as soon as you breathe into the mask and stops after you take the mask off. It is also super quiet and doesn’t have any complicated menus. So, if you have a CPAP dinosaur fossilizing on your nightstand, it may be time to upgrade. There’s a better, sleeker, and more advanced CPAP world out there.