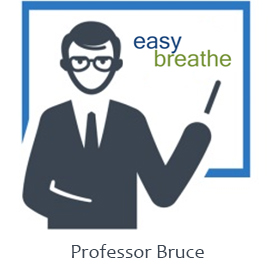 I want to talk about the plague of sinusitis that affects CPAP users. Anybody that has had sinusitis can attest to  how uncomfortable trying to sleep becomes. First nasal masks become useless when your sinuses are clogged and even full face masks are not as comfortable when you have clogged sinuses and post nasal drip down the back of your throat.   Essentially CPAP treatment becomes almost unbearable. The thing is, though, that most people don’t clean their CPAP every day – as they should. The problem with this is that within twenty-four hours, bacterium has already started growing.

With each passing day, there is more and more bacterial growth, especially in the areas of your CPAP that collect droplets of moisture. Much like turning on your air conditioner after a long winter causes dust and pollutants to blow throughout your home – if you don’t clean your CPAP mask and you turn on your system, all that bacteria that has built up gets blown straight into your sinuses. This can cause inflammation and in the worst cases sinusitis.  Sinusitis causes swelling, inflammation, facial pain and a whole list of symptoms you would much rather avoid.

When it comes to cleaning my CPAP equipment, I always thought I was doing a thorough job – nothing like some soap, water and a little elbow grease. However, I still found myself suffering from symptoms of inflammation and occasional sinusitis – stuffy nose, discomfort and so on. Obviously, I wasn’t cleaning my CPAP effectively enough. One of the clear signs that you have CPAP related inflammation or sinusitis is if you go to sleep with a clear sinus and no congestion, and then wake up feeling like you have an elephant sitting on the bridge of your nose.

This is why I was so surprised by the SoClean 2 – after just a few days of using the system my sinuses were totally clear. I have been using the system for over 3 months now and have yet to experience systems of inflammation or sinusitis. 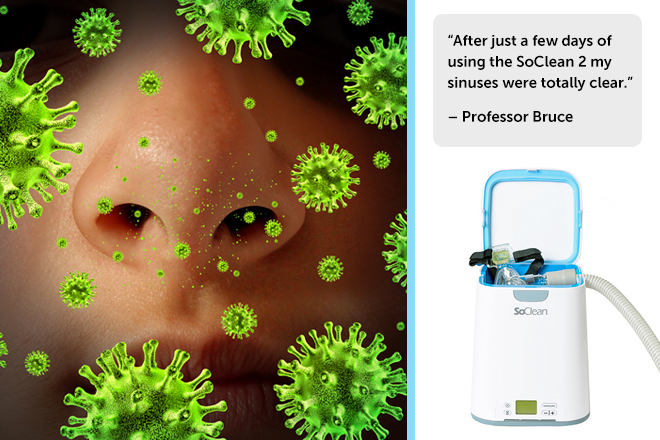 It is funny what excites me.  As nice as the health benefits are, what I get the greatest thrill out of is how easy the SoClean 2 is to use. All I have to do is pop in my CPAP headset into the compartment at the top of the system, close the lid, and after a few minutes, a little light signals that my mask and hose are sanitized.  Ta da! – Everything is sparkling clean and fresh for when I go to bed later that night.  It makes a bit of noise so I set the timer to run the 10-minute sanitation process at 10am which is after my wife’s lazy cat decides to wake up.

How does the SoClean 2 work? You know that sweet, delicious smell after a rainstorm? The reason why the air smells like that after a storm is because of the electricity in the atmosphere – the same electricity that causes lightning – has forced a third molecule of oxygen to combine with the two existing molecules of oxygen that we breathe to create a new compound: O3 or enhanced oxygen. It is totally natural, safe and non-toxic to humans and animals – the only thing it affects is microorganisms like inflammation causing bacteria. In fact it is often used for sanitizing spas and pools. It is this enhanced oxygen that the SoClean 2 utilizes to remove 99.9% of bacteria from your CPAP – no water, no soap, no mess and no fuss.

Lastly, the SoClean 2 surprised me for many different reasons – its power to clean, the ease of use, how safe it is and the fact that my painful symptoms of inflammation and sinusitis have gone away. Best of all, I am no longer waking up with a stuffy, runny nose that is messy and uncomfortable. From a health standpoint and from a good night’s sleep standpoint, I don’t know how anyone can live without this cleaning system.